Every year, the E3 gaming conference captures the attention of the gaming community. How could it not?  Last month, gaming companies released captivating trailers, announced a plethora of new upcoming games and projects and video game enthusiasts opened their wallets for pre-orders. The E3 conference is a massive boost for the industry – an industry that generates a massive amount of revenues compared to the movie industry. In 2017, movies grossed USD 39.92 billion at the box office worldwide while the video game industry generated USD 108.4 billion in revenues.

But as the computer game enthusiasts were salivating over the newest First-Person Shooter (FPS) or the next Real Time Strategy game (RTS), there was an ongoing, and glaring, omission of what may be a great possibility – a game based around peacekeeping. The majority of video games involving armed conflict still continue the ‘good guy vs. evil bad guy’ mentality where the player represents a wily and almost indestructible action hero or a general that leads their troops and nations into battle against others.

But modern conflicts demonstrate that the parties involved encompass many shades of grey and not merely good or evil. The modern conflict is dotted with militaries, aid workers, insurgents, gangs, corrupt local governments and people and towns caught in between. Significantly, peacekeepers have become essential for the resolution of many of the world’s conflicts.

The emergence of a peacekeeping gaming sub-genre is critically needed for several reasons. 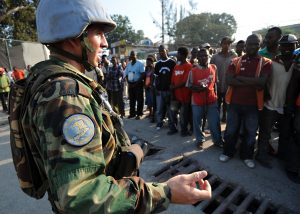 An Argentinean UN peacekeeper talks to men waiting for their female family members Feb. 16, 2010, at a soccer stadium in Port-au-Prince, Haiti.

Peacekeeping games can introduce the warfighter as many FPS games have, but have an element of decision-making, morality and allow for the games’ eventual outcome to have a different ending to reflect the morality and decision-making of the player. There are FPS games that test your morality, such as Spec Ops: The Line.

FPS games would not be the only ones that would be affected. Diplomacy has been a part of some strategy games for some time and there is a whole plethora of strategy games that test your diplomatic skills, such as the Total War series. The diplomatic aspect can be further explored. There is the ability in the Total War series, to create alliances, negotiate truces and trade agreements, but it is tantamount to bribing the computer AI with resources than a multifaceted diplomatic effort.

There can and should be some games with a peacekeeping aspect where the player is attempting to prevent or stop a conflict and/or maintain and build the peace between warring factions. Integrating a peacekeeping gaming element into both genres could encompass the tactical, operational and strategic complexities of a modern peacekeeping mission.

In fact, there is an abundance of peacekeeping scenarios and vignettes that a video game can integrate with some ease. The UN Tactical Level Protection of Civilians Training Modules outline many great examples, such as:

This list alone can create a very entertaining game that would distract normal gamers for hundreds of infuriating hours (depending on the level of complexity). Nonetheless, it would provide a unique and challenging experience for the hardcore and casual gamer. Interest in such a peacekeeping game could also be solidified with a skill level advancement, that is found in the role-playing game genre and in-game achievement badges, which is now becoming a norm for many video games.

Not only can these peacekeeping games bolster an interest in global peacekeeping awareness and recruitment as the FPS genre has for military recruitment. They could also act as training for pre-deployment or even in mission. This is not a new a unique or unexplored concept as the video game VBS1 (Virtual Battlespace 1) was used as a training tool for the Australian military and then adopted by the US military when VSB2 was released. Bohemia Interactive Simulations, then, used the technological platform of VBS1&2 to release the Arma series for the mass market. But it is not just the West that are creating these games, Hezbollah in 2003 released “Special Force” and Special Force 2 in 2007 – where the player takes on the Israeli Defence Forces as a member of Hezbollah. Again, aiming to create recruits for the cause. It is time for a peacekeeping video game that provides another side of the conflict, where there are decisions to be made where going out gun blazing is actually the worst option.

Technology has advanced to the degree that portable virtual reality technology gives a player the feeling of actually “being there” but within the virtual 3D environment. The creation of potential real-life scenarios within a peacekeeping area of responsibility can potentially provide a significant training boost. This could greatly improve the effectiveness of UN peacekeeping personnel on the ground. Unfortunately, the UN does not have provide any simulated computer training environments for its peacekeepers, although it does offer in written materials in real-life scenarios taken from existing missions.

The UN’s Integrated Training Service (ITS) for peace operations is the main body responsible for the conception, production and evaluation of training tools. However, it does not have sufficient capability to create a video game to support its training programme. However, because of the increasingly accessibility of VR the technology, it means that much of the VR technology is becoming readily accessible in the commercial, mainstream video game industry.

Peacekeeping gaming would give a tremendous boost to the UN’s training effort. And it might prove to be both entertaining and instructive not only for actual peacekeepers but for gamers the world over.

DefenceReport’s Analysis is a multi-format blog that is based on opinions, insights and dedicated research from DefRep editorial staff and writers. The analysis expressed here are the author’s own and are separate from DefRep reports, which are based on independent and objective reporting. 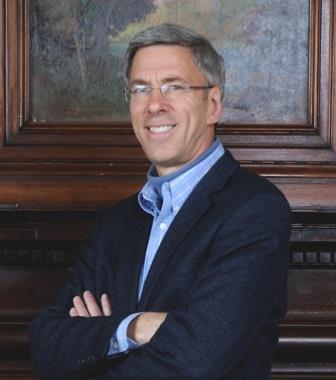 A. Walter Dorn is Professor of Defence Studies at the Royal Military College of Canada and the Canadian Forces College (CFC). He is Deputy Director for Graduate Studies at CFC and teaches officers of rank from Major to Brigadier. He has served in UN field operations and in 2014 served as a member of the UN’s Expert Panel on Technology and Innovation in UN Peacekeeping.